Fri 29th Apr 2022: Ushering in a new episode for an old picture house

It feels a lifetime ago that some of us were at Essex Record Office poring over photos. It was only a few months BC (Before Covid), and we were preparing for September 2019’s Heritage Open Day which would include an exhibition about Halstead picture houses at the Empire Theatre. The colourful header illustration (courtesy of Essex Record Office) of the old Colne Valley Cinema from the 1915 plans is just one of a few fine drawings we came across.

The cinema was to be built on the spot where a derelict public house called the Railway Bell stood on Trinity Street.  Following a fire in 1906, the pub was closed a year later by the authorities, but it was not demolished until December 1914.  By this time, the growth of cinema technology was phenomenal and picture houses were appearing in every urban corner of the land. Halstead Urban council had only viewed Plans for the Empire Theatre a few months earlier when a Mr Grimwood submitted his proposal for the Trinity Street establishment. The architect, Leonard Crawford, clearly hoped to provide some sophistication as well as the enjoyment of moving pictures. The plans that were finally submitted in 1915 (header image) showed a design with many decorative features, a balcony, and sliding roof.  The cinema opened on 12 June 1916. 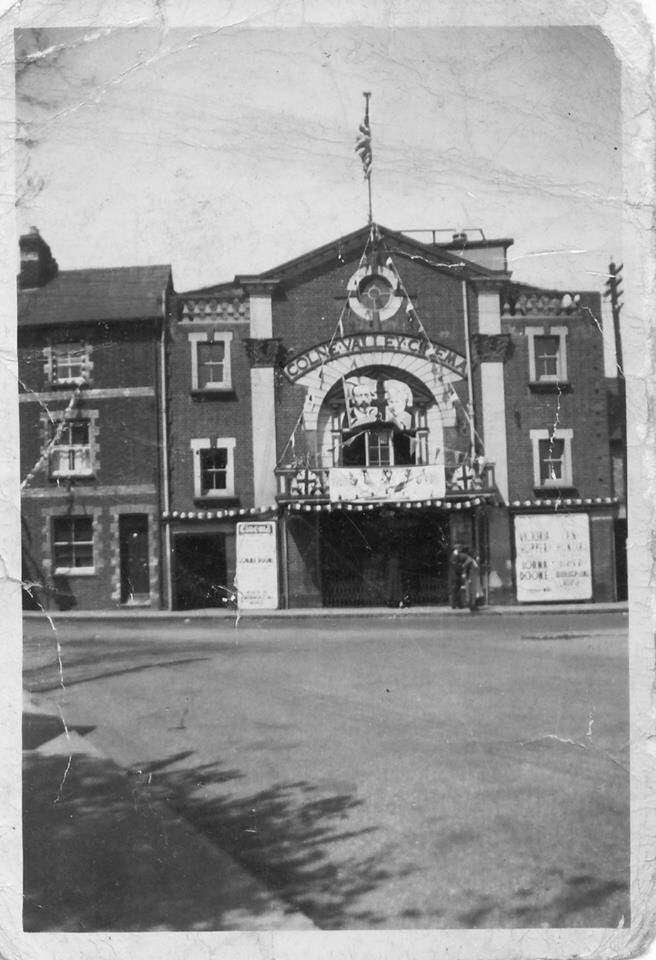 'Moving pictures' was the new technology and a burgeoning industry in the early 1900s, and many hundreds of picture palaces were built across the land between 1910 and 1920. The 1914 Kinematograph Year Book shows that around 5,000 companies had already been set up.  Two cinemas were built to serve  Halstead during this period, but during our visit to the record office, we came across plans for a third cinema in Parsonage Street that was never built.

The growth became unsustainable, however, before long both cinemas were managed by the same company. Colne Valley Cinema became known as The Picture House around 1945, and the Savoy Cinema in the early 1950s. It closed as a cinema in the 1960s but continued for another ten years or so as an entertainment venue, although it took on various guises after that - including a Chinese takeaway, The building became a children’s play centre in 2010, and although the business didn’t last long, its multi-coloured paintwork did.

Proposals to convert the property began in 2014 and in 2017.  Despite its local significance, the property is not on Braintree District Council's Local Heritage List The Historic Buildings Consultant deemed it a non-designated heritage asset meriting certain considerations, especially regarding the windows and doors to the frontage.  Modifications of the plan followed and, in 2018, approval was finally given to build six flats with the upmarket name of Savoy Apartments.

A quick glance through the front door suggests that the building is not yet complete. Nonetheless, the top-floor apartment is now for sale.  Most local people are delighted to see the removal of the garish paintwork, but others are dismayed by the appearance of the incongruous black box atop the roof.  The large first-floor window is an attractive and characterful feature that harks back to the building’s origins, however, a new Historic Buildings Consultant overturned his predecessor’s conditions about the ground floor windows and doors to the façade. The black utilitarian glass UPV door and sash window provide no hint to the 1916 cinema is out of keeping with the upper floor. In my view, the result is a lack of harmony with its history. However, the building's future is safe and, according to the estate agents who are marketing the properties, the interior is quirky and characterful.  The apartments should be ready for occupation in a month, and black box or not, I wouldn’t mind that view of the park from the top flat.

We've heard about the 'tuppeny rush' when local children would rush between the kids' matinees at both cinemas. We'd love to hear of any memories you have of the building in any of its forms and will add them to this.  Just fill in the form or email us at inf@halstead21stcentury.org.uk.

This is our 30th blog, so there are many more to read; the subjects are varied, but there's always a local slant. And we always welcome guest bloggers, so if you'd like to contribute please let us know.