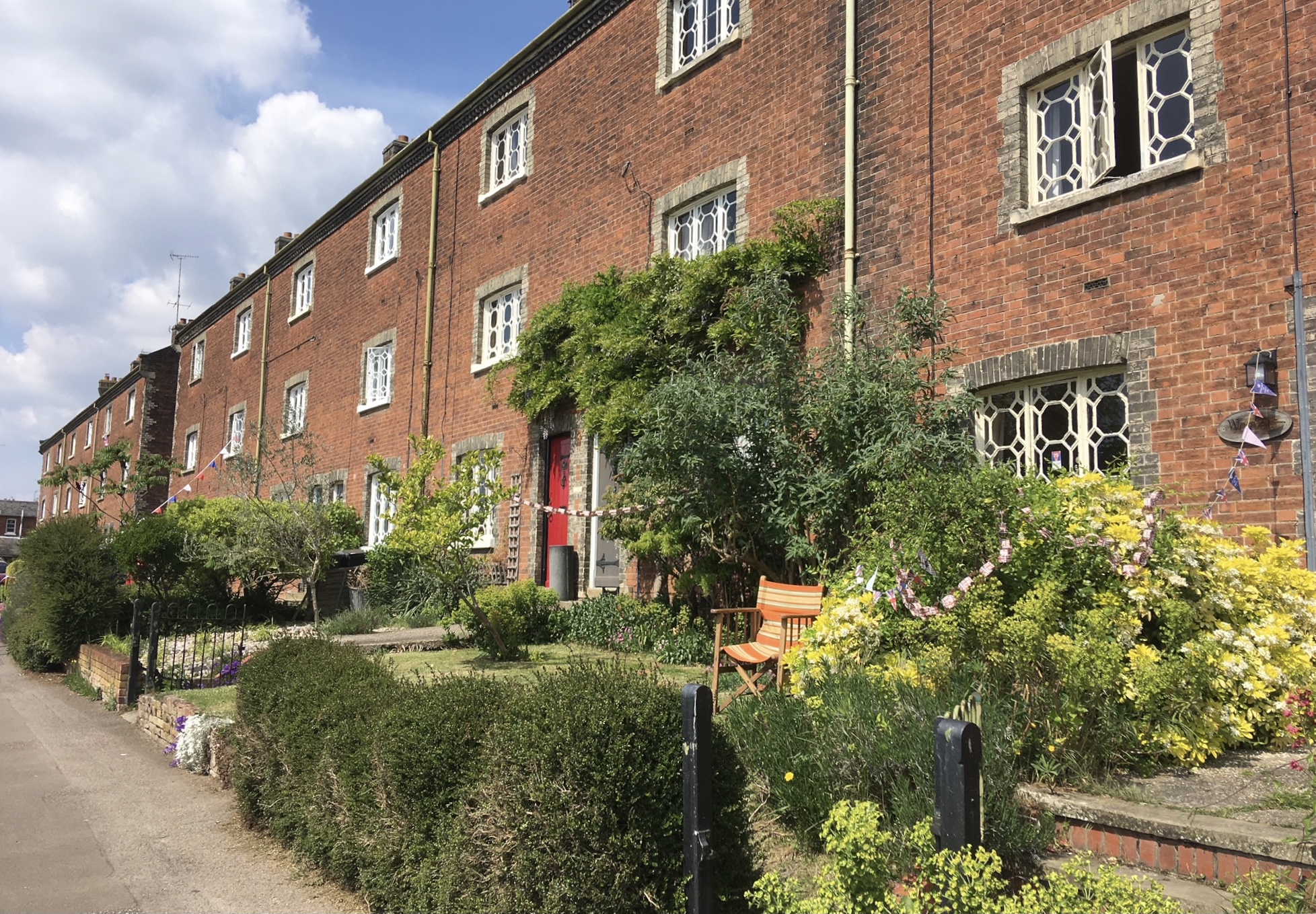 Jan and her family moved to Halstead in 1975, although it was to be some years later before they moved into their own listed building on Factory Lane East.

Built in 1872 by Courtaulds for workers at the Halstead silk mill, Jan’s 3-storey home is one of 16 terraced houses that were Grade 2 listed in 1978, nine years before she moved in. She has vivid memories of walking in the shadow of the factory down Factory Terrace, being deafened by the sound of the looms and thinking to herself, “I wouldn’t want to live in one of those houses!” (The image below shows the back of the terrace and chimney, with the factory behind it.) 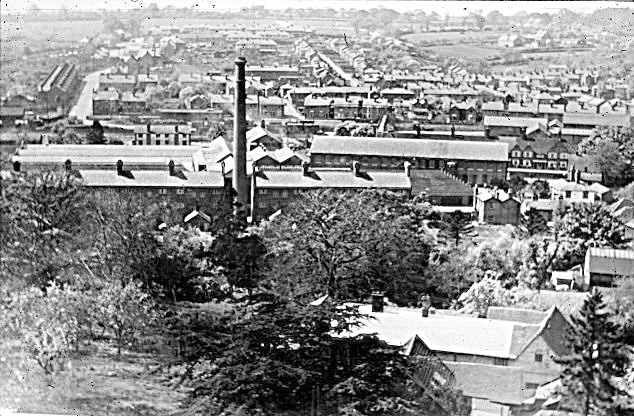 By the time Jan moved into Factory Terrace in 1987, the Courtaulds factory had closed and been demolished, and the Co-op store was just starting to be built. The lane was now light, sunny and quiet and the beautiful building was in a perfect position close to the shops with a peaceful back garden. Having previously lived in ‘characterless boxes’, the unusual metal windows (cast at the former Rayne Foundry)  and front door attracted Jan too.

Over the years Jan has reinstated original panelled internal doors and replaced crumbling Art Deco tiled fireplaces with the cast iron sort that they would have had when the house was built. In the early 90s, she applied for and was granted Listed Building Consent for a small back extension in keeping with the property. Most of the rest of the work though has been cosmetic as the house was built to a high standard and always maintained well.

The construction of cavity walls, a ‘modern’ building technique in the 19th century, shows just how advanced the Courtaulds approach to building was. They also provided indoor sanitation long before many other landlords. Plans from 1909 show how the link between the main house and the existing WC were to be constructed for their tenants. The Courtaulds were forward-thinking - and they built things to last.

Steve and Sally’s timber-framed home is very different to Jan’s, and at around 400 years older, it must be one of the oldest dwellings in Halstead. 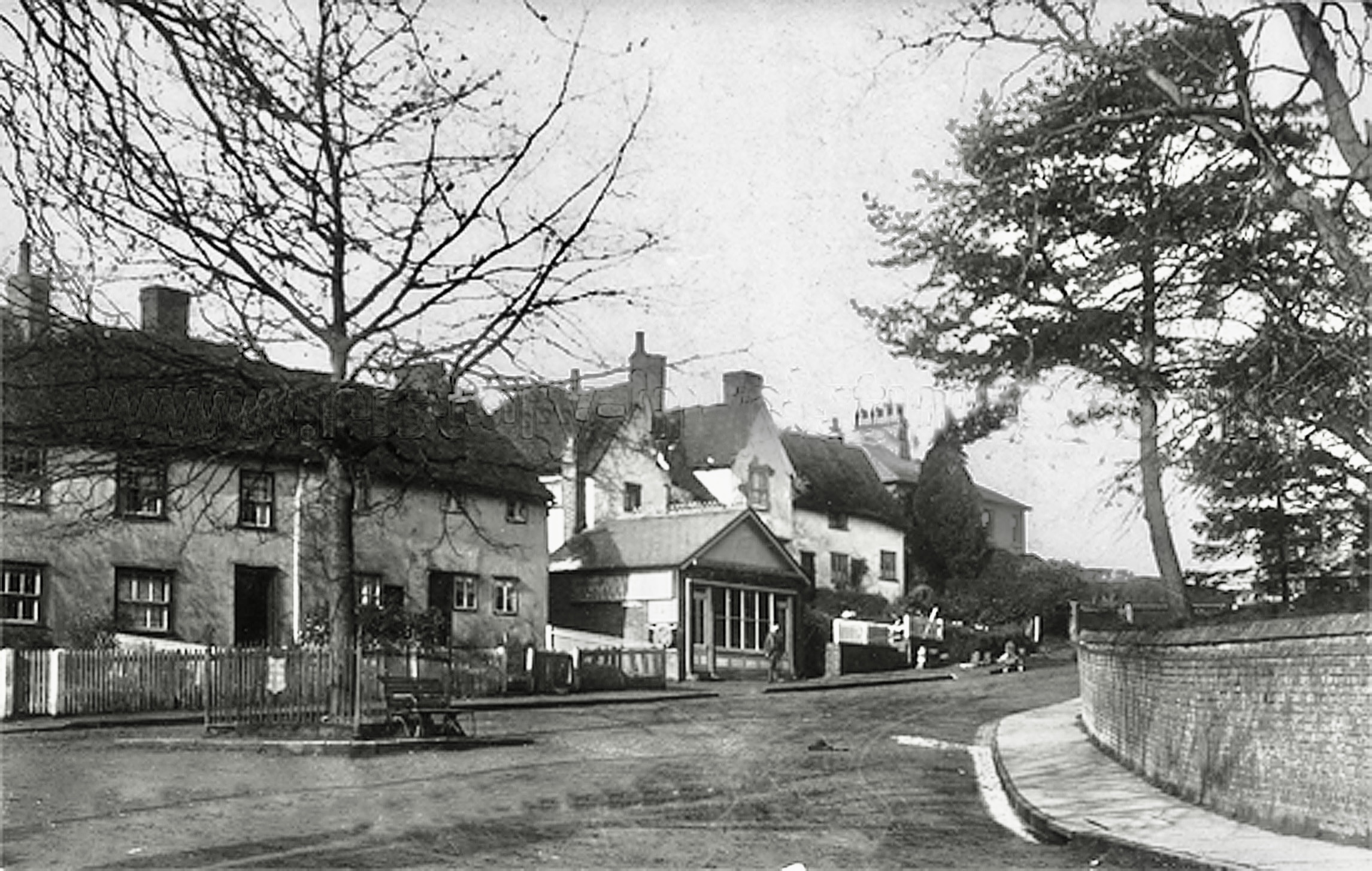 Facing Holy Trinity Church across Chapel Hill it’s one of three terraced houses, but was once a single property.  It was also had a single storey when built around the 1450s. The upper floor was added about 200 years later.

Steve bought his home in 1974, after he and his wife looked through the window, saw the beams and fell in love with its character and history. Braintree District Council provided the mortgage but stipulated that certain works must be carried out within 6 months of purchase. Some of the work involved undoing the damage done by the concrete that had been rendered in the 1960s and hadn’t allowed the building to breathe.  Much of the work was done by Steve, family and friends – his old school friend Jan remembers them removing the floor, digging trenches, replacing timbers and revealing the original fireplace behind a small Victorian one.  The building was listed (Grade II) in March 1978.

The essential work was carried out within six months but much more was carried out in the following years, including restoring the lath and plaster with traditional lime plaster. Metal windows had been in place in the 1970s, but after seeing a photo of the building in 1914, Steve swapped them for replica wooden frames.  The labour of love continued  - although the ‘love’ can’t apply to the hard labour needed to remove the thick black paint from the great oak beams! They look lovely now though.
One of the most interesting finds was made while they were investigating a bedroom chimney-breast to reveal a fine cast iron fireplace. It was stuffed with a sack in which they found a pair of tattered trousers and a crumpled newspaper 1914 - something that had not been seen or touched since an earlier occupant put it there a century ago.

Jan, and Steve and Sally love living in their listed properties and all consider it a privilege to be a custodian of such important parts of Halstead’s heritage.

Historic England are asking the public to send them more information to enrich the list.

We'd love some more historical details too. We've put together a list of Halstead's listed buildings (around 130 entries) and are working with the team at Halstead Heritage Museum  (part of Halstead & District Local History Society) to match the properties up with some recent and old photos. Can you tell us more about a local listed building?

All information submitted using our online form would be very gratefully received.