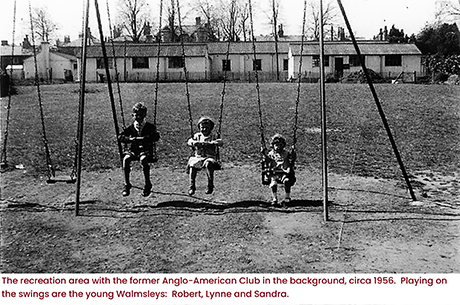 Noon on Friday 22nd October was the deadline for the offers on the former senior citizen’s site. They are now under consideration by current owners, Braintree District Council, but Rightmove’s website suggested a guide price of £450,000 for this ‘development opportunity’.

This area was part of the public gardens, which along with other sections of the park, was gifted to the people of Halstead for recreational purposes in 1901. The green space is marked out in this black & white photo taken some time after 1916. The formal gardens and recreation grounds were created to commemorate Queen Victoria’s Diamond Jubilee in 1897.  George Courtauld, kickstarted the funds and local residents raised £1,500 of public subscriptions to buy a suitable piece of land.  Charles Portway provided the bandstand to mark his company’s 50th anniversary, and Adams Brewery, just across Trinity Street, provided the pipework to the pond.  Halstead Public Gardens were opened by George Courtauld on Whit Monday, 1901 - some months after the monarch’s death.

The New Street area was taken over by the Ministry of Works during WWII and the Anglo-American Club for servicemen from the local US Army Airfields was opened in January 1944.  As the name suggests, it was both for the use of the US Army and local people. The late Dave Osborne told us about playing football near the club and being given cups of tea there. He also remembered 'borrowing' one of the dozens of bicycles that were often propped up on the fence, despite them being much too big for a child like him.

The building took on various civic uses in later years, including accommodation for the Ministry of Agriculture and Jobcentre and HQ to the local history society for a while. Then, during the nation’s local government reorganisation in the early 1970s, ownership was transferred to Braintree District Council.

Local people might remember the most recent use of the building as an Age Concern centre. However, it was demolished in 2013, the gates locked and the space remained unused.  The rest of the public garden became a Centenary Field and thus protected in perpetuity. The last part to receive this protection was the picnic area, negotiated later with Braintree District Council, who did not initially accept it as part of the public gardens. With much help and mediation by Mrs Pell, a town and district councillor, it too became part of the Centenary Field. Without her support, there’s a strong possibility that the picnic field would have been included in the sale site.  Instead, it has been an inclusive play space since June 2021. The public garden is just one of the many local heritage places and spaces on Braintree District Council's Local Heritage List.

The sale of land gifted to the townspeople so long ago remains a sensitive issue, and Local residents have responded to social media posts about it by asking whether Halstead will benefit financially from the amount paid for the land. The decision to sell the plot was made soon after the last building’s demolition. To compensate the town for the loss of a community resource, Braintree District Council agreed to contribute a figure towards the new community centre planned for Butler Road – one substantially higher than the site’s current guide price.

In the meantime, we await the outcome of the sale and the planning application that will doubtless follow.

Do you have any stories to tell about the old Anglo-American Club building throughout its life as a community resource, or its many users? Please use the heritage form to let us know if you do.